My amazing trip to South America was coming to an end in Buenos Aires. With so many exciting adventures and sights in my rearview, I had one more day to soak in as much as I could!

Before my trip, I noticed a small issue with our last day. We were required to disembark the ship by 9:00 am but our flight was not until 6:30 pm. Not wanting to sit in the airport all those hours and being unable to check our luggage until two hours before flight time was a dilemma. I did some online research and found a company owned by a British Expat who offered pick up at the ship, a city tour and drop off at the airport.

I reached out to Howard Crowston and received a very prompt response with answers to all of my questions! The email response also included details and sites included in the city tour. Knowing in advance what we would visit, allowed me to do some research for background info.  The payment was easily made online and a plan was hatched and finalized very quickly and efficiently making the process pretty painless.

Howard met us at the baggage area in the ship terminal. We loaded everything into his car and off we went for our Buenos Aires adventure!

Located at the center of a four-acre park is the sculpture of Floralis Genérica. A gift to the city in 2002 by Eduardo Catalano, this is no ordinary statue. The sculpture is designed to move, closing its petals in the evening and opening them in the morning. With six petals weighing 18 tons, this movement symbolizes new hope each day when the petals open. It’s pretty impressive!

Bosques de Palermo (Palermo Woods) is known as the crown jewel of parks in Buenos Aires. At 400 hectares, it is known for its groves, rose gardens, and beautiful lakes. The park was opened in 1875 and was designed as a celebration of the overthrow of Juan Manuel de Rosas.

Parque de la Memoria also known as Remembrance Park is a memorial to all those who disappeared in the Dirty War. The park area is about 14 hectares. Having 18 sculptures there is also a ramped path. A symbolic wound is created by the path which runs to the river where the wall of names of those killed or vanished can be found. The names are placed on the wall so that everyone, no matter their height, can reach out and touch all names. As Howard explained the story of the “Disappeared”, I couldn’t help the tears that flowed thinking of the trauma the victims and their families suffered.

A silent tribute to the “Disappeared” is seen in the goalposts on the football fields in Argentina. The bottoms of the posts are painted black resembling a black armband worn to mourn the loss of life.

THE 4TH STOP: Cemiterio de Recoleta, The Most Famous Cemetary in Buenos Aires

I realize that this is a morbid statement, but this is the coolest cemetery I have ever seen! Before entering Howard had told us how awesome it was but it’s impossible to comprehend until you see it! There are even street signs to mark the graves. The entire cemetery is laid out like city blocks, with wide tree-lined main sidewalks which lead to sidewalks filled with mausoleums. In some of the tombs, there are multi-generations families laid to rest. The cemetery contains 4691 vaults, 94 of which have been declared National Historical Monuments. Along with Evita (Eva Peron), there are many notable people whose remains are vaulted such as noble peace prize winners, Argentine presidents, and important military figures.

Dating back to 1822, the cemetery itself and it’s founding are an interesting story being built around the former Recollect convent. The convent was disbanded and the name was changed to the North Cemetary and at some point reverted to Recoleta to reflect the original founding.

Named for the independence achieved as a result of the May Revolution, Plaza de Mayo was opened in 1884 and today is the main hub of the city. It is here, that Eva Person gave her famous speech to the descamisados, the shirtless ones. (working-class people who politically supported Juan Peron.) The balcony of the Pink House at Plaza de Mayo is the location from where the speech was given. Plaza de Mayo is also of great importance as it is where the mothers have marched each week since 1977 demanding information about the thousands of people who disappeared in the 1970s and early 1980s.

Plaza De Mayo is considered “downtown” and is the area in which you will find the financial district. Around the Plaza are several other important monuments.

THE 6TH STOP: La Boca, The Most Vibrant Neighborhood in Buenos Aires

La Boca (translated to “the mouth”) was tons of fun; colorful, vibrant, and alive with great shopping and fabulous food. Originally, the people who settled here were from Genoa, Italy and to this day, an Italian flair remains. I was on sensory overload as we walked through La Boca. The colors, the sound, the activity, and the aroma of the food were amazing. The colored street pavers were painted as a project by school children; a fact I found very interesting. After some shopping (Howard scored me a great deal on a pair of shoes and an Argentine football jersey. I love those shoes!), we sat for a fabulous lunch and great conversation. As we sat and relaxed, we had the pleasure of seeing Argentine Tango street dancers! The day ended up being fantastic!

Located on the Río de la Plata riverbank, is the neighborhood of Puerto Madera. The Rio de la Plata has some very shallow spots and large cargo ships would have to ferry their products and passengers in on smaller boats. And, as a result, a new port was built which made Puerto Madera obsolete. In the 1990s, city and government officials plowed through the necessary tasks to renovate and restore the old warehouses. Today, this is a very fashionable, trendy area popular with businesses and tourists. It is here you can find expensive steakhouses, chic boutique hotels and shops, and lively nightlife. It is truly the epitome of urban renewal. 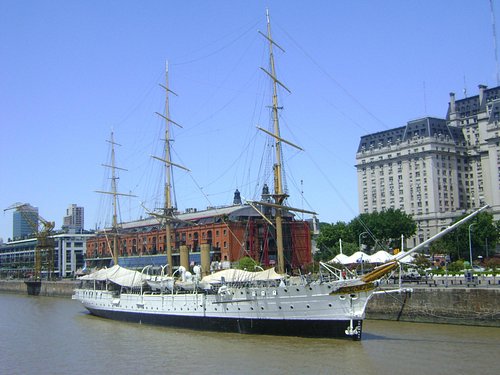 RECAPPING MY TRIP TO BUENOS AIRES

After a fabulous city tour and making a lifelong friend in Howard, we were headed to the airport, ending our journey to South America.

During our trip that began in Lima, Peru, we traveled through five countries. We wore shorts and then parkas and then shorts again. South America is a diverse continent, rich in history and culture. Now living in Central America, I know I will travel south again.

Until next time, friends, remember “To Travel is to Live!”

Fernet and Coke: The Cocktail of Argentina

Ushuaia? Let’s Travel to the End of the Road Together!

The National Dish of Argentina: Eat Like a Local with Asado! Recipe and Video